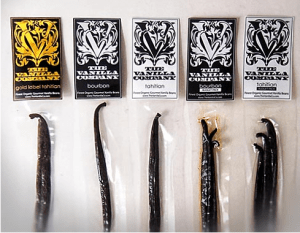 Thanks to my graphic designer, Mia De Lara (follow her on twitter.com/mobudays) I have just recently discovered The Vanilla Bean Company, an awesome Filipino company that sells REAL Vanilla beans and essence.

No self-respecting baker/chef will buy vanilla flavoring in the grocery. Thank God, I’m no baker and chef…not yet, but I have to admit to using fake vanilla essence in the past but those days are OVER! From now on, the Eppersons will only use real vanilla beans and essence. OK, now, we’re “respectable” cooks. Haha!

Go authentic and 100% vanilla bean! Not only is it healthier, it shows far more impressiveness to your cooking style! Pang chef lang ang level!

So why go real vanilla? Well sweeties, anyone who had used vanilla before knows that it can go quite a long way with just a tiny bit of it! So much stuff are out there using vanilla, like custards, cakes, drinks, etc. But did you know that even some go-to brands especially for vanilla essence are not made from real vanilla bean? It’s actually a mix of chemical flavors, additives, and therefore very harmful preservatives! Moms, will you want to bake your little ones these stuff? A definite no, no, NO! Woosah…

According to The Vanilla Company, “for a richer and more distinct taste and aroma, we recommend a blend of both our Bourbon and Tahitian vanillas.”

This would be perfect for my sheet cakes! Aryannna and Tom are the happiest using vanilla bean for their pancakes, cookies and cakes!

The Vanilla Bean Company products are available at these stores: http://thevanillaco.com/Store-Finder/