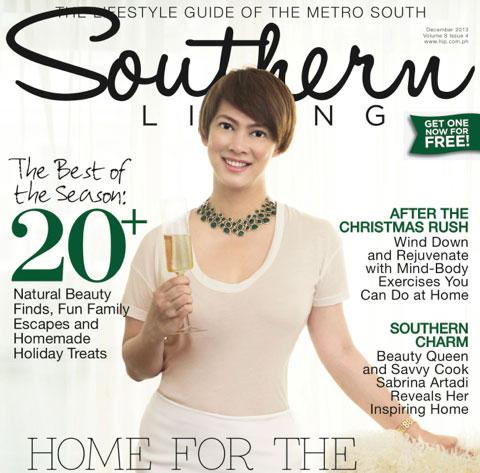 When the folks at Southern Living magazine told me that they wanted to do a story on me and put me on the cover of their December issue, I was thrilled! What better month to grace a magazine cover than the happiest time of the year!

However, the day that they scheduled the shoot was the around the time that typhoon Yolanda/Haiyan happened. Our home was turned into a satellite soup kitchen and there were so many boxes of clothes and food that my family and I were packing scattered in the living room. Maison Epperson was a virtual war zone. We were all busy helping out the survivors by packing relief goods and sending out donations that Tom and I literally had less than an hour to shoot.

Despite the rush, the staff of Southern Living were very understanding and gracious. Thank you Dianne and the rest of the SL team! I’m very honored to be on the cover of your magazine—the lifestyle guide of the Metro South.

This was an outtake from the shoot. What you don’t see in the photo is the mountain of packed relief goods scattered on the floor. The magic of photo shoots! I also have to thank my husband Tom for shooting guerrilla style, haha!