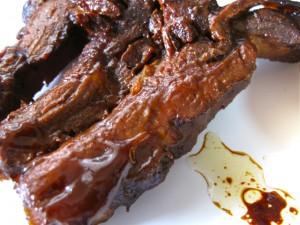 In our home, I am the queen of quick, easy peasy meals, but there are times when I just want to take it slow… As in, slow cooker style!

The slow cooker or Crock-pot®

A slow cooker or Crock-Pot® (a US trademark that is often used generically), is a pot that slowly cooks food on your counter, rather than on the stove. The pot has an A/C cord and a vented lid, but no temperature controls aside from a high and low setting. It is designed to cook unattended so that you can add ingredients to the pot in the morning before work, then come home eight to ten hours later, to a perfectly cooked meal.

When using a slow cooker, there’s no need to lift the lid and stir the contents during cooking. In fact this will release the heat which will cause the food to take longer to cook.

Have you guys ever tried using a slow cooker? I tell you, cooking with it can get addicting! I remembered the first time I ever cooked a meal using one, I was eating stews for months! Haha!

Step 1: Mix all the ingredients for the sauce

Step 2: Coat all the ribs with the BBQ mix

Step 3: Set slow cooker to low and cook for 4-5 hours, until tender. Don’t overcook it as the ribs dry out fast.

Step 4: Brush the cooked ribs with the BBQ sauce on top. Put the lid back and cook for 30 more min. Turn off the heat and serve hot.

The meat may look dry but it’s really not. Once the ribs are cooked, I brush more BBQ sauce on top and let the leftover heat in the pot cook the sauce.

The Eppersons love cornbread. It’s perfect to soak up the sauce from the plate!

When pressed for time, I bake cornbread muffins and it cooks half the time compared to cooking it on a skillet, it only takes 12-15miutes.