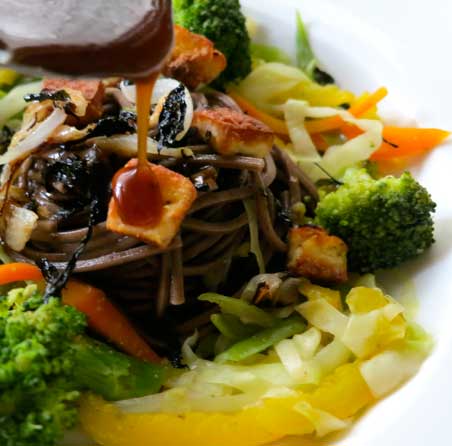 Let’s start the week healthy, shall we? I’m doing Meatless Monday for my blog to jumpstart my journey to a healthy and active lifestyle.

I love pancit canton! The downside about my favorite instant noodle is that the salt content in every package is so high, may manas factor after eating it. Aminin!

I believe that I can have my pancit canton and eat it too without feeling guilty. I experimented in the kitchen last weekend and the result is yummy:

Whatever vegetables available in your fridge

According to Dr. Perricone:

Seed, Grain and Health Powerhouse
Though it is usually thought of as a grain, buckwheat is actually the seed of a broadleaf plant related to rhubarb. While it is not a true grain, it is used like one in cooking, and it surpasses rice, wheat and corn on almost every measure of healthfulness (including the fact that rice, wheat, and corn are high on the glycemic scale, thus provoking a quick spike in blood sugar levels, a proven promoter of systemic inflammation). Buckwheat, on the other hand, ranks low on the glycemic scale.

Hulled buckwheat kernels (called groats) are pale tan-to-green, while the roasted buckwheat groats known as kasha—a staple food in Eastern Europe—are dark brown with a nutty flavor. Kasha is often steamed in a stock with onions, olive oil and fresh parsley, and you can combine equal parts plain buckwheat groats and oats, and cook the mix to enjoy as a hot breakfast cereal topped with berries. Buckwheat has been cultivated for at least 1,000 years in China, Korea and Japan, where it is often enjoyed in the form of buckwheat “soba” noodles—a form that’s become increasingly popular in the West as a healthy substitute for wheat pasta.

Buckwheat has more protein than rice, wheat, millet or corn and is high in the essential amino acids lysine and arginine, in which major cereal crops are deficient. Its unique amino acid profile gives buckwheat the power to boost the protein value of beans and cereal grains eaten the same day. Yet, buckwheat contains no gluten—the source of protein in true grains—and is therefore safe for people with gluten allergy or celiac disease.

For the pancit canton dressing/sauce:

Extra virgin olive oil (EVOO) is super healthy! It is rich in monounsaturated fat that may help lower your risk of heart disease. It’s one of the good fats that our bodies need. Whenever I make a sauce, dressing or dip, I try to incorporate EVOO.

Step 1: Using a wok (or any deep pan), steam the vegetables in it’s own juice. No need to add water.

Cover the wok and steam in low to medium heat for 3 minutes.

Step 2: Season with salt and pepper and toss the veggies

Step 3: In a separate pan, heat up some olive oil and fry the cubes of tofu till golden brown

Step 4: Once the tofu is crispy, turn heat to low and sauté the garlic and onions

Step 4: Boil water and cook buckwheat noodles according to package directions. It usually takes 4-5 minutes to cook the Japanese noodles.

Step 6: Time to make the dressing/sauce of the pancit canton! Whip all the sauce ingredients until they emulsify

Step 8: Drizzle 2 tbsp of the dressing/sauce to the noodles and vegetables

Serve with a smile!

My kids and Tom loved my little experiment. They’re my best critic. According to Aryanna, I should chop the vegetables smaller so there are no issues for the kids. Haha!

This healthy pancit canton recipe is the BOMB! Don’t just take my word for it, try it! Soooooooo delish!