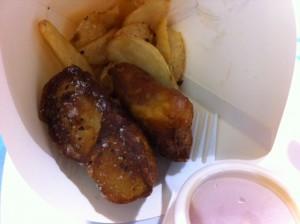 In London, everyone loves fresh fish in golden crisp batter, served with golden chips plus a dash of salt and vinegar.

So far, I’ve only been to London twice, but I lived on fish & chips! I love those golden nuggets of seafood and fries!

So, you can imagine how excited I was when Stylebible’s Isha Andaya-Valles gave me the lowdown on her hubby Chef Enrique Valle’s new venture: Chuck’s Grub Fish & Chips!

I love their logo!

Mom, check out the crispy fish!

We ordered the cream dory, snapper, and halibut.

Traditional English “chips” are made with real potatoes, peeled, and cut into half-inch fingers then fried. Eaten fresh, chips have a crisp outside that cracks open to reveal a steaming, starchy, glistening white inside. Eaten normally (soused in salt and vinegar and nestling in the newspaper).

Chuck’s potato wedges were well-seasoned. I love salt and freshly ground pepper on my potatoes!

Proper British chips are essentially potato, not like French fries.

English-style fish & chips are dipped in vinegar. I tried it and it’s good but I prefer the garlic mayo and tartare sauce.

What Aryanna and I liked about their sauces is that they were light yet tasty. The flavors did not overpower the fish.

Tom on the other hand is a purist, he preferred only plain salt, pepper, and lemon juice.

Choose your own dip

Meet the friendly staff of Chuck’s Grub: Bernard and Net-Net!

Me: “Damn you Isha! You killed my special diet!” *LOL*

I highly suggest that you eat the fish & chips while they’re still hot. When freshly cooked, the beer batter of the fish is TDF! Super duper crispy on the outside and soft seafood goodness on the inside!

Tom’s favorite: Halibut- the fish is delicate and melts in your mouth.
Aryanna’s favorite: Snapper- two snaps for the light and delicate flavor!
My favorite: Cream dory- the tastiest fish of the bunch!