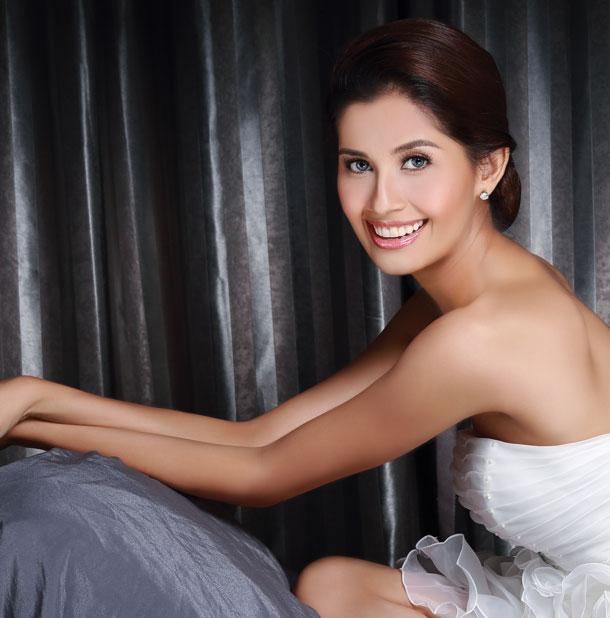 And for Shamcey, the timing couldn’t be more perfect.

She is slated to wed boyfriend and business magnate, Lloyd Lee, this December not once but twice.

“I just want to look radiant on my big day and I know Facial Centre can help,” the bride-to-be says with a smile.

The 27-year old stunner wasn’t always so open about skincare and makeup. More than anything, she was more conscious about her self described, “super duper hairy” body and religiously shaving and waxing as much as she can.

“I grew up with my dad so hindi ako talaga ma-dress or ma-kikay,” she explains. It was only when she started doing the pageant rounds 4 years ago that she started taking notice of how other girls paid special attention to their skin.

“Of course my mom would tell me to wash my face properly,” she recalls, “But the other girls would be talking about this product and that product so that’s when I really got into it.”

She tells a story about the time she had to do a back-to-back shoot out of the country and by the third layout, the makeup wouldn’t stick on her skin. “Ayaw na kumapit nung makeup because my skin was overused and tired. It was really mahapdi and irritated from all the retouching and brushing.”

Her body hair was a different issue altogether, citing difficulties in being able to show a hair-free body at a demanding schedule. “When I started, sinabi nila na para akong monkey sa sobra kong balbon! So I would wax everything as often as I can— whole body pa. Sobrang sakit.” And since waxing requires a minimum amount of hair length, she would carry an emergency razor along with other girls in the pageants who had the same problem. “Kala ko ako lang yung may ganitong really hairy problem, hindi pala. ” she muses.

She’s been trying to make amends ever since. And with Facial Care Centre, she finally can.

Since she started with her new skincare family, Shamcey has been going for a combination of facials, a RevLite Total Rejuvenation program and a LaserLight Hair Removal program for her body, which she describes as “finally removing everything off”. Having only started the hair removal program recently, she’s starting to notice the change—finer hair and less of them. Soon, she’ll be able to look forward to never having to feel the pains of shaving again, once her program is over.

Helping her revive her tired skin are different types of nourishing and repairing facials and the latest non-invasive technology to give her a unique dose of radiance.

“If I have an event today, I go (to Facial Care) in the morning. Or pag hindi naman, ihahabol ko siya for the last slot.” she explains. She’s adamant about letting her skin rest after the perils of pageant life to the point that her fiancee is making jokes too.

More than anything, her weekly treatments have become a sort of date for the two lovebirds.

“Every time I have a rest day, we set an appointment for a couple’s room and get a facial together. Yun yung bonding time namin and he actually enjoys it,” she shares.

When it comes to talking about her soon-to-be hubby, Shamcey is all smiles and praises. “Actually when I see Lloyd, I say ‘Your skin..yan ang akin peg’. It’s fresh, young, wala masyadong pores..” she shares. The admiration just grew deeper as the months passed by after their first meet.

“The first time I met him, meron ng chemistry. Siguro nung sinagot ko siya, you just felt ready. We’d talk about marriage even before this so when we both got into this relationship, we were both serious. And nung naging boyfriend-girlfriend kami, it was already a sign that we’d get married,” she says thoughtfully.

And what about her dream wedding?

“We’ve been planning for quite some time now but as the wedding draws closer, that’s when you realize there’s so much more to do!”, she says. Her excitement though, is overwhelming. Contrary to what most people might think, Shamcey’s favorite part happens after the wedding— when she, Lloyd and a few close friends will go to Shamcey’s hometown of GenSan for a small party. And then there’s the big day itself when she gets to say “I Do” to the man she knew she was going to marry. And unlike their past dates, she wants to look radiant—for him and for herself. Shamcey’s bridal beauty treatment consists of a RevLite program, which she is still currently taking for her arms, legs and face.

RevLite is Facial Care’s newest non-invasive treatment dubbed the Total Rejuvenation solution for the skin. Using one of the most sophisticated Q-switched lasers in the world, it emits a smooth and even heating to target and lighten uneven skin tone and hyperpigmentation and even cases like freckles and melasma— conditions that were previously untreatable with older technologies.

The secret lies in the rapid pulse widths that make it a highly effective procedure with less heat and increased safety. And with the PhotoAcoustic Technology Pulse, these narrow pulse widths are delivered with a flat-top beam profile, zoning in and breaking down only the chromophores that cause the pigmentation— no hot spots, no hitting healthy tissue and needlessly damaging them.

And because it is a total solution, RevLite also improves skin texture such as smoothening rough chicken skin, a common problem for most Asians. It’s also becoming the popular choice for Filipina morenas who consider their uneven skin tone a bigger problem as they seek a skin color that’s more “pantay”, as opposed to the stark difference in pigments due to the overproduction and concentration of melanin in a local area. A problem that RevLite promises to address and eradicate once and for all.

With RevLite, brides-to-be and those looking for a unique dose of skin luminosity and radiance can finally put an end to skin discoloration. And for Shamcey, it’s achieving a girl’s dream of having that heaven-sent, natural glow for a match made in heaven.