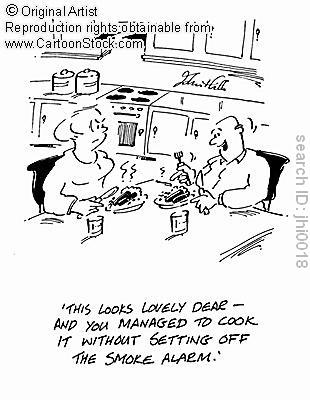 According to Urban Dictionary, a backhanded complement is “an insult disguised as a complement”

“You drive well for a woman!”

Winston Churchill was the master of backhanded complements. He had the perfect combination of sarcasm, wit, bittersweet praise, and disdain:

Backhanded complement in other words is: “Laglag”

A long time ago, I used to serve backhanded complements at my former assistants and friends as a joke. None of them ever complained or at least not to my face.

Anyone who’s heard my backhanded remarks in the past can attest that I did it all in the name of fun. I didn’t mean to be mean or insult anyone — it was my kind of “cariño brutal“. I thought I was funny until I got “served” — everyone thought it was funny except me.

You really don’t know what it’s like, until it happens to you. Ever since I was given a backhanded complement, I’ve been more conscious about my own antics. I’m a loving person and I love cracking jokes but not to a point where I might hurt other people’s feelings. I want to remain honest but not tactless.

These days, I’m better at dealing with people who give backhanded complements. I just put my best smile on and say “thank you, that’s so nice of you! How sweet!”. I made the decision to let go. This did not come naturally at first, but I noticed that I felt better. I genuinely don’t care because I know that there are people in my life who genuinely like me and care about me. Those are the ones worth focusing my thoughts on.

You have to know who you are, what you stand for, and what your standards are in terms of what type of people you want in your life.

In case you’ve been a victim of backhanded complements, here’s an article I found online that might help:

Even if you’re a thick-skinned person by nature…certain words sting.

Some of these words are intended to hurt, but most of them are offhanded remarks that simply weren’t thought through before they were spoken. Either way, these blunt comments can be hard to hear.

“She’s got some meat on her bones…but I think it’s sexy.”

“Your article was fantastic, considering it was your first attempt at the assignment.”

Backhanded compliments are almost worse than a simple insult. An insult can instantly make you angry, but a sly remark can eat at you over time. We know better than to take these comments at face value, but as we analyze the remark, we start to question whether they really are true.

Most unintentional insults bring a woman face to face with her insecurities. Even the most confident and secure woman can be sent into a tailspin when her image, intelligence, competence or personality are attacked. Worse yet is when the insult comes on the heels of encouragement, which makes the statement even more personal. The power of words is so much greater than we assume!

Just like with a straight-up insult, resentment can start to brew if you harbor these words. Without properly responding to these thoughtless statements, you can harbor a lot of resentment for the person who tore you down after they built you up. I don’t know about you, but the last thing I want to deal with is a hefty dose of negativity floating around in my mind!

So how can you respond to backhanded compliments instead of just dropping your mouth in disbelief of the lack of tact some people seem to possess?

Fight the urge to retaliate. Regardless of how old or mature you are, there’s always going to be a quick impulse to lash out in response. It’s human nature to defend ourselves by deflecting the negativity towards someone else! Even though turning the cattiness around can seem vindicating, it never helped matters in middle school, and it won’t help anything as an adult.

Address it. I’ve got a bad habit of withdrawing and getting extremely quiet when I’m hurt. Not speaking up as often as I should has resulted in a lot of silent sulking in the past – and I can’t say that any of it was productive! I’ve learned that I can’t keep quiet and still expect others to understand that they did something that bothered me.

If someone makes a comment – intentional or otherwise – that insults or offends you, speak up! If the words were spoken inadvertently, letting the friend know that their humor was out of line can help them be more mindful of future comments – to you and to others. If the backhanded compliment was intended to be hurtful, you need to make it clear that you don’t tolerate that kind of communication. This can seem difficult if you’re non-confrontational, but setting boundaries and standing up for yourself gets easier with practice!

Refuse to harbor it. It’s so easy to lose precious hours wallowing in the aftermath of a petty comment. I’ve wasted hours working myself up over a ridiculous jab that wasn’t worth a single second of my time. Personal slams can easily make you question whether you’re good enough, and they’re incredibly hard to let go of once you start mulling over the words and trying to put meaning behind them.

Don’t play the words over and over in your head. Don’t entertain the five different connotations the comment might have had. Breathe in, shake it off, breathe out…and refuse to mull over it any further. Growing a thick skin is easier said than done, but deciding that the comment is purely insignificant in the grand scheme of things can help you let it go.

Do something to re-boost your self-esteem. At the end of the day, you are the only one who can make you feel better – or worse – about who you are. No comment – negative OR positive – can permanently change your perception of yourself.

If you’re reeling from a backhanded compliment, throw yourself into a favorite activity that you know makes you feel happy with who you are. Go volunteer at a charity that coincides with your personal passions, bust butt on a great workout or chat up a kind-hearted friend that always makes you smile.

Shopingero/shopingera, you can’t control what other people say or do, but you can control how you react to it. At the end of the day, you are the only person whose opinion matters.