Since it’s Valentine’s Day, I thought I’d share with you my love story with Tom. Yiheeeeeeee! Haha

My husband found this article from Philippine Star’s Allure. The piece was about inter-cultural marriages and one of the couples featured was Tom and me. It was written by the late Ann Montemar-Oriondo.

I edited out the other couple featured and corrected some of the dates.

This is a major throwback!

Whoever said that East is East and West is West and that the two will never meet would have been more than surprised if he had met Tom and Jenni Epperson. For if there’s anything to learn from this lovely and loving couple and their inter-cultural marriage, it is that love is the language that binds cultures; all the way to happily ever after.

Ace photographer Tom Epperson, a surfer and a harmonica player for the Blue Rats, was born in Ohio, grew up in California, then lived a good part of his life in Sydney before settling in the Philippines in 1985.

Jenni studied in St. Scholastica’s College and besides being a columnist of the Philippine Star‘s Allure section, she is one of the country’s most sought-after fashion stylists.

Jenni and Tom have been married since l995 they have a daughter, six-year-old Aryanna Epperson.

See why love knows no bounds; nor cultural barriers; in this revealing peek at the couple’s love life. 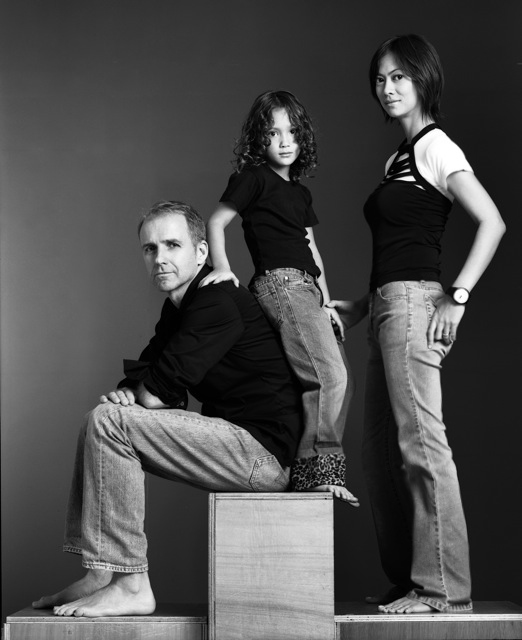 How It All Began

Jenni: I was handling one of the Linea Italia shops in Makati in l994 where Tom shopped. I occasionally greeted him. I thought this “foreigner” looked really fit and cool.

Then my staff told me that Tom wanted to go out with me. I thought he was attracted to one of the staff in my shop, turns out he’d been gathering information from her about me, so it was a big surprise to me. I was not keen on going out with him because I’ve always had Pinoy boyfriends and had only gone out with Filipino men.

I thought I would feel uncomfortable going out with a foreigner because we might not have anything in common to discuss. I also thought they were more aggressive. So, I tried to decline the few times he’s asked me out but because he was persistent, I finally said yes.

Everything was set for a dinner date and that night he got sick so he cancelled. I was relieved! But being stubborn, Tom sent me a bouquet of flowers the next day with a note apologizing and asking for another date. To get it over and done with, we set another date. I chose to have dinner in a crowded place so there will no chance for us to be intimate.

Surprisingly, we talked for hours and we found we had a lot of things in common. I knew from that moment on he was the man I wanted to marry.

Tom: She made it difficult for me to take her out on a date. I asked her staff what the best way was and they told me to send her flowers, which I did but she still turned me down. As I am not one to give up, I approached her staff again and asked why I was given the cold shoulder. They basically gave me the same advice and told me to buy more flowers. Now, I thought her staff were either getting a cut from the florist or I was being taken for a ride! Finally she agreed and we went out.

Courtship And A Few Minor Glitches

Jenni: There was no “real” courtship compared to my previous suitors and boyfriends. The whole time we were hanging out, he did not make any moves on me (which I kind of feared, thinking foreigners were more aggressive). We became good buddies and finally married in 1995.

Tom: It wasn’t long after our first date that I asked Jenni’s staff if they would like to come back to my studio to have their photograph taken as a gift for Christmas. It was then that I knew I would end up with Jenni.

Jenni: Like many Pinays, I grew up having house helpers and nannies to help me out, and do things for me all the time. Being with Tom who is independent and organized, I had to domesticate myself a bit. Though I am capable in the kitchen, I am not good in cleaning up the house or being organized. So I constantly have to remind myself to put things back where I got them or at least make sure I tell the helpers to put it back for me.

Tom: Jenni grew up with house maids and I didn’t so I had do things pretty much for myself where as she has always dependent on someone else to do things like cleaning. I actually enjoy doing most things for myself and find it hard to sit still.

In the beginning, I think religion was a little bit of an issue between us but we were able to talk about it. I’ve always believed you should respect another person’s religious beliefs but should never impose those beliefs onto her.

Food was another subject where Jenni and I have our differences. She is very Filipino in her eating habits: rice and viands where as I am not by any means your typically fast food-eating American. In fact I was this strange kid who decide at the age of 14 to give up hamburgers, soft drinks and most other junk food. Maybe this had to do that I was very much into surfing. I love to cook and being in the kitchen. To this day we actually eat different foods.

Jenni: Family comes first before anything. We also share a passion for improving our crafts and finding ways to be creative. When we travel, we both like going to different beaches and prefer places where the locals eat and hang out.

Tom: Because we both come from broken families, we realize that in marriage there are no guarantees. We know that there will be good times and bad and that the good will always outweigh the bad.

We are both extremely lucky, too, to be in our given professions as we love what we do and it just makes it that much easier.

We basically share the same values when it comes to raising our daughter. We also try to take the most endearing values from each others culture and teach her. Like Filipinos are, we would like her to be more caring to her family. And as Americans are, we want her to become more independent and responsible, to be able to do things for herself, not to be dependent on someone else and that she has to work hard for what she wants to achieve or to have in life. We encourage her too to express herself as an individual and celebrate her uniqueness.

Jenni: Tom’s been there for me when I was down and shared my excitement when times were good. He trusts in me completely and is not possessive, I’ve grown as an individual in a relationship. I can do things for myself as a career woman since he doesn’t make me feel guilty about it.

I like his playfulness; he makes me laugh and makes light of a bad situation. We always have fun! I also love that he respects his body and tries to be fit and trying to look even better for me. I am more attracted to him now than we first met, that to me is important in a good marriage.

Tom: The first thing I noticed in Jenni was how she always smiled and how much her staff liked working for her. She is one of the most caring people I’ve met especially when it comes to family and her close friends. Thank God she is not the prima-donna type who I would have had no time for. She is outgoing and adventurous, it was her idea to take me bungee jumping at Subic Bay, a real test. She basically doesn’t mind getting dirt under her nails.

Tom: There are basic issues that are important to talk about in a marriage, more so in cross-cultural marriages. Taking the time to communicate with one another is the best way instead of having to wait and see.

Jenni: Do talk about areas that you feel problems might arise such as religion, values, financial responsibilities, what country you’ll live in, relatives/family and children. Accepting each others difference and learning to compromise are also keys to a happy marriage.

OMG. Has it been 12 years already since this interview?!

Tom and I have read this article a few times and it’s funny how we still feel the same way about our values and our feelings towards each other. We feel so blessed and grateful.

The only thing that has changed (for the better) is that I’ve been influenced by Tom to eat better. I hardly eat rice too. I also have become super organized at home but I could never clean the house. I still leave the dirty work to my helpers (sorry Liza!!!) as I’m allergic to dust. Oh, well… I’m not the perfect wife but according to Tom, he’s perfectly happy with the way I am. Naaaaaaks!!!