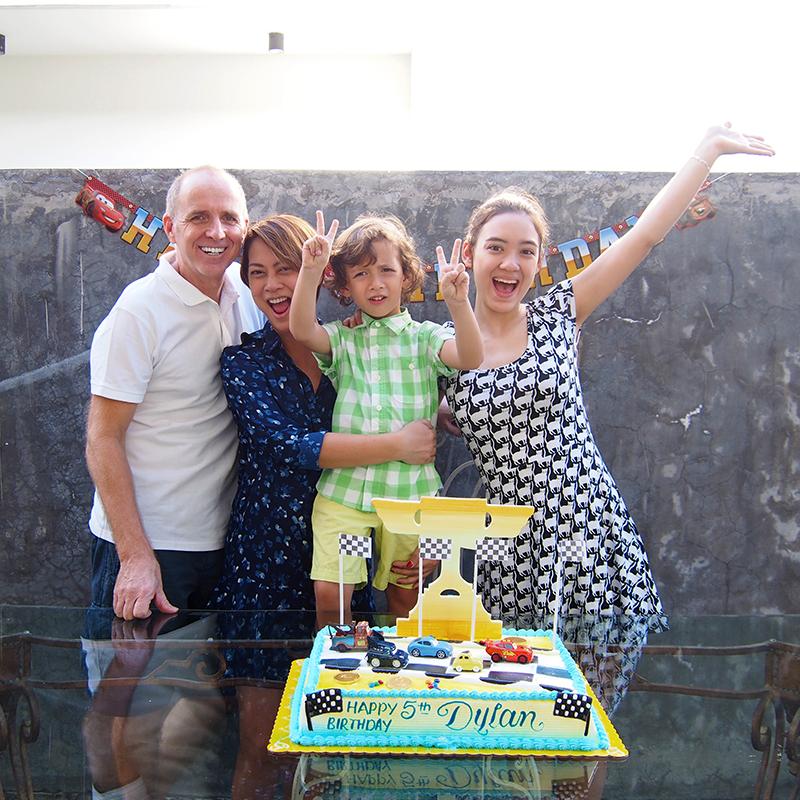 It’s my son Dylan’s birthday today, January 26. He turns 5. Happy birthday, dahling! We celebrated his birthday though last Sunday. We wanted something simple, stress-free and personalized so we threw him a block party—we literally just invited all the kids in our street and some of his friends in the village park.

Our original plan was only to have cake and playtime. Dylan told us last week he didn’t want the kids singing the “Happy Birthday” song (according to him it’s too loud and they sound “bad,” haha) and no party games because according to him, it’s corny. Grabe naman. Anyway, Dylan only wanted cake and to play at home with friends. Easy. OK!

Aryanna found free invitation templates on the net and we printed them. So cool!

Dylan: “It’s my birthday party today!”
Me: “We’re picking up your cake today!”
Dylan: “Woohoo! I’m going to have cake, spaghetti, hotdogs and ice cream! What time is my party, mom? Where are the balloons?”
Me: *panicking* I thought you only wanted cake and playtime with friends?”
Dylan: “Yeah. I also want balloons! I want spaghetti! I want lots of ice cream too!”
Me: “You’re joking, right?”
Dylan: “Mom! You’re the joker!”

So, you can imagine how I panicked after that conversation. Haaaay! Shotgun party!!! I only had two hours to prepare for a full blown party before I pick-up the cake. Jesus, take the wheel.

Thank God, I have a good team and they helped me work on some birthday party magic: Tom and Aryanna. It was technically the very first party we organized for Dylan. In the past, it would just be the family celebrating in our previous condo. Oh. Em.

Tom took care of the “pabitin” and Aryanna organized the balloon bouquets. Winner!

My son wanted a Lightning McQueen themed cake so I also got some character gifts for the goodie bags.

I love the balloon bouquets from National Book Store. They are super cute and affordable (P300+ for each arrangement) although, they have very limited choices for now.

As requested by my son: home-cooked sweet spaghetti, hotdogs with marshmallows, sandwiches and I ordered Aling Nene’s Pork BBQ (our favorite! They deliver too!) We normally don’t eat these, but since it’s his birthday, we caved in on the sugar fiesta!

We ordered the themed cake 3 days in advance. So cute. So “Dylan!”

The party was set at 3:30PM. I love how most of the kids were punctual—a good start.

Most of the girls came early. According to their nannies, they wanted to hangout with my son. Oh, boy.

Aryanna set-up a Lightning McQueen temporary tattoo station at the entrance. The kids got “inked” before the party. Great idea, sweetheart!

No need to make the kids, nannies, and parents wait. Kain na agad-agad!

How happy is the birthday boy?

Make a wish and blow the birthday candle… If you can reach it! LOL

Time to divide and conquer the birthday cake!

I scream for ICE CREAM!!!

The most-awaited game: “Pabitin!” Some of us parents gave the smaller kids a little boost.

Soccer and basketball amongst the kids. Tom included.

There was so much leftover cake. We gave some to the neighbors and kept a few slices for ourselves. Everybody happy.

Time to open the prezzies!

What a cute personalized birthday card! Thanks, Charlie!

Happy birthday my dahling Dylan! You are the family’s game-changer. You bring so much joy and happiness into our lives. Wishing you a happy and healthy life!