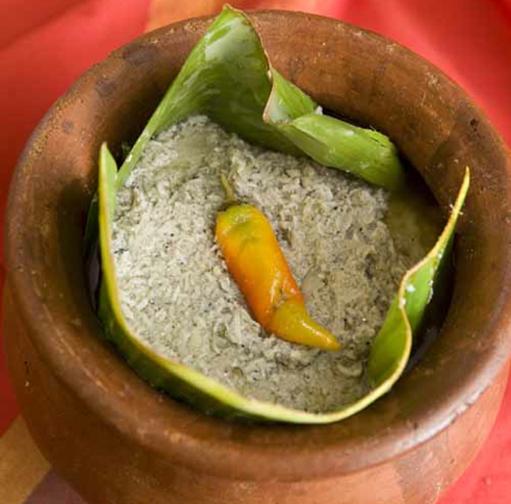 I received an invite from Mandarin Oriental Hotel’s Director of Communications, Ms. Charisse Chundian, to an Ilonngo fiesta buffet at Paseo Uno. Being part Ilonggo myself (dad’s side), I jumped at the opportunity to savor some food that I ate growing up.

It was also a chance to practice speaking the dialect with my fellow Ilonggos. Oh boy, I realized that I so need to speak Ilonggo more! Ka dugay na!

Chef Pauline Gorriceta-Banusing, renowned for representing Iloilo’s famous culinary scene, is no stranger to the kitchens of Mandarin Oriental, Manila. Back in May 2006 she had her debut as a featured chef at an Ilonggo food festival dubbed as “Manamit!” at what was then the Captain’s Bar (now the MO Lounge), where she delighted guests with a medley of her hometown’s signature cuisine. In a fitting encore the following year, she continued to bring the culinary treasures of the Panay Islands to the heart of Makati while reinventing classic dishes such as Steamed Talaba, Batchoy and Chicken Inasal for individuals with the most discerning taste.

In September last year, the star of her divine menu at Paseo Uno was the succulent diwal, or angel wing clams, which Filipino artist Claude Tayag described as “diwal-icious”. “Diwal-icious Visayas: Bounties of the Sea” had a successful run, hence the comeback of this prized delicacy this month of May as Paseo Uno unveils “Diwal and Other Ilonggo Flavours” from May 25 to June 3, 2012.

Diners can look forward to lining up at the grilling station for the succulent diwal, a specie native to the Visayan region; Grilled Managat (Mangrove Jack); and Talaba (large oysters from Aklan). Also on the menu are Ilonggo specialties such as Chicken Inasal, Iloilo’s most popular chicken dish; Chicken Tinuom (steamed chicken cooked in banana leaves); Uhong na may Gata (oyster mushrooms from San Miguel Iloilo with coconut cream and grilled pork); Adobado na Alimusan (cultured mudfish from Guimaras); Kinilawin na Tanigue na may Tuba (slices of tanigue fish marinated in a special native vinegar from the mountains of Leon, Iloilo); Lukon na may Aligue (fresh prawns from Roxas City with crab fat sauce); and Sinugba na Lokos (grilled squid stuffed with lemongrass, cilantro, ginger, and tomatoes) among others.

Diwal or “angel wings” from Capiz

One of my favorites, lukon na may aligue. Mmm…

Thanks Charisse for a mouthwatering spread!

Shoppingero/shoppingera, you must try the diwal and other Ilonggo flavours at Paseo Uno, Mandarin Oriental Hotel now!